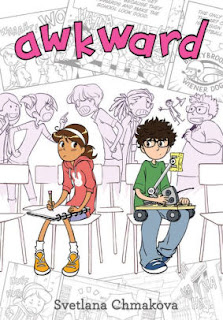 On the first day of school, Peppi Torres breaks her resolution to keep a low profile by tripping and spilling her bag in the hallway.  Mortified, she lashes out at shy nerdy Jaime who tries to help her, pushing him away and yelling at him.  Wracked by guilt in the aftermath, Peppi keeps trying to find a way to apologize to Jaime.  Convinced that he hates her she can't work up the courage to just actually do so.

It's all complicated by the fact that she's in the art club and he's in the science club, and the two clubs are in a cutthroat competition to be granted a table at the upcoming club fair.  Things escalate as the clubs are pitted against each other to produce a contribution that will benefit the whole school  In the end, though, it is Peppi's ability to cooperate with Jaime and the science club that will save the day.

First in a series of graphic novels (as of now, there are three books in the series) that explore middle school life. It's a successful series, but I don't find much that is remarkable about the story or the artistry, although both are good quality.  The book is entertaining and a fast read and the artwork and layouts quite competent.  But my coolness to the book is creditable at least in part to the truth that I'm not a fan of graphic novels of this sort.  They seem largely derivative of Japanese anime and in my opinion add little more than a change of milieu.
Posted by Paul at 7:44 PM