Beast: A Tale of Love and Revenge, by Lisa Jensen 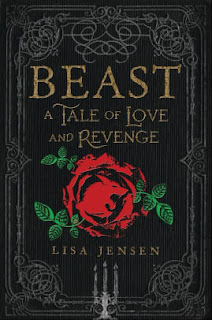 Lucie is a poor peasant girl, hired as a chambermaid in the chateau of Jean-Loup.  He is a cruel and heartless man, as epitomized by his brutal sexual assault on Lucie.  Pregnant and devastated, Lucie flees to the forest where she is cared for by an old woman who assures her that Jean-Loup’s reckoning is near.  The old woman subsequently subjects Jean-Loup to several tests which he fails and she casts a spell which converts him into a horrible beast.  Gleeful and vengeful, Lucie begs to be able to witness his humiliation and is transformed into a candlestick holder.  Years of darkness fall on the chateau until an old man stumbles on the castle and begs for shelter.  While there, he asks for his host to give him a rose for his daughter.  The die is cast!

And, while you think you know the rest of the story, this is where it grows interesting.  What if the Beast were a true gentleman (you’ve seen the Disney version, so don’t tell me that you can’t imagine it!)?  And what if the man he was before was in fact the beastly cursed one?  What would rescuing the man from the Beast actually achieve and what would be lost?

In this reimagining of the classic tale, Jensen poses these questions, keeping the original story intact, but addressing matters so blithely skipped over in the original.  The story is a bit more mature than a YA fantasy usually is, but still a read that younger readers can enjoy.  For me, it was a bit hard to drive Disney’s version out of my head at first and Rose is a poor replacement for Belle (whose role is actually played here by Lucie the candlestick – a most non-Jerry Orbach character if there ever was one!).  The pacing is decent, although the various plot twists towards the end get dizzying and some elements (like Rose’s conniving family) are wasted.
Posted by Paul at 1:27 PM