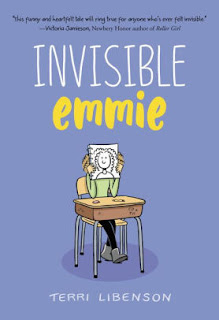 Seventh-grader Emmie isn't geeky or ugly or unpopular -- she's simply invisible.  Talking to other kids (especially boys!) makes her revert to a puddle of slime.  She lacks the confidence of her BFF Brianna (who's also a bit bossy!).  Instead, she races through the hallways and hides in class trying to avoid being noticed.

The contrast couldn't be any stronger with cool, outgoing, and popular Katie, whose life is bigger and brighter than anyone in the room.  But when a particularly embarrassing and humiliating moment happens, Emmie and Katie discover a common bond and both girls find that they have something to learn from each other.

Ostensibly a story about finding one's voice, this charming graphic novel navigates the familiar territory of building interpersonal skills, dealing with bullies, and forgiving human frailties.  And while much of the material is cliche, Liberson approaches it with a delightful mixture of respect and knowing elder wisdom.  While I have no doubt that children will Emmie's observations about school and parents, this is the sort of book that is almost more fun for those of us who have been through it all.  It is fun to look back with a knowing smirk that no matter how horrendous it all seemed at the time, this too shall pass (and perhaps to imagine that we were as much fun as Emmie)!

Liberson's approach is full of warmth.  I especially liked the supportive relationship between Emmie and Katie, who (despite being attracted to the same boy) don't let it get between them.  A small twist at the end threatens the book's message, but I think Libenson has still managed to convey the idea that kindness in the end is what matters.  In sum, a cute look at seventh grade through a witty and funny narrator.
Posted by Paul at 11:32 AM