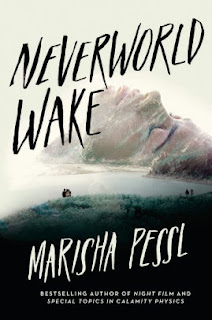 One year after the death of her boyfriend, Beatrice returns to the elite boarding school in Rhode Island where they both attended, for a mini reunion.  The remaining members of the gang are there, but things are strained.  The tension feeds an angry vibe that climaxes with a wild drive through the night that ends in a car crash.  But instead of being dead, the five young people find themselves stuck in a time loop where they are forced to live the same day again and again.

They have fallen into the "neverworld wake," explains a stranger who calls himself the Keeper, and they will remain in it until they take a vote.  One of them will escape the wake and the others will die.  Who gets to live?  That is what these five angry and distrustful former friends have to vote upon.  And the result must be unanimous or the loop begins again.

At first, the five of them refuse to even vote.  Then, as desperation sets in, they try voting but find that they can't achieve consensus.  It is only after thousands of repeats that they begin to understand what they must go through to get out -- but will they succeed before madness and entropy condemn them to be stuck inside the wake forever?

An original, but weird story (actually more What Dreams May Come than Groundhog Day).  It's part science fiction, with a dose of mystery and psychological thriller, and even a little humor thrown in. More a mood piece than character developing, the protagonist and her peers never get all that interesting.  I found it very hard to get into.  The novel's saving grace was the story and its many twists and turns.  When the plot is brisk, it is a fun read, but it drags just as often as it soars.
Posted by Paul at 3:51 PM