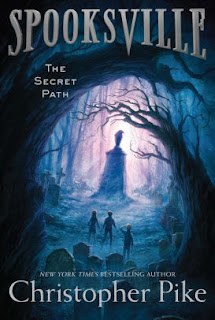 Adam has just moved with his family to the town of Springville.  The first kid he meets is the loquacious Sally, who between being obsessed about her identity crisis and helping herself to a Coke that Adam was sent to the store to buy, informs Adam that the kids around the town refer to the place as "Spooksville." She then proceeds to tell him tales about all of the crazy things that happen in the town involving ghosts and witches.

Meeting up later with Sally's friend Watch, the three of them embark on a quest to find a secret path that leads to another dimension where the town is replicated, but everything is dark and scary.  There they must struggle with large spiders, a giant black knight, and an evil witch who wants to steal Adam's eyes.  It's all in a day's adventures in this first of a long-running series popular in the 1990s and reprinted regularly since.

I picked this one up on a recommendation from a friend who enjoyed reading the series as a child.  It's easy to see the appeal.  While hardly fine literature, the characters are endearing (Sally, with her snarky commentary and observations, was my personal favorite) and the action brisk.  While much of that action doesn't make much sense, it doesn't stop us from enjoying an exciting ride.

Sadly, the current cover fails to capture the lovely campiness of the first editions and makes this softcore horror book seem like it might actually be scary, instead of a fun read for middle schoolers.
Posted by Paul at 7:47 PM