Tell Me No Lies, by Adele Griffin 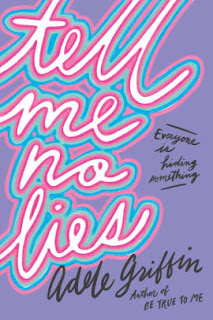 It takes the arrival of Claire in the beginning of their senior year to get Lizzy to come out of her shell.  For years, Lizzy has laid low trying to hide from the embarrassment of having had a grand mal seizure in front of her whole school.  And she's also struggled with being cossetted by her overprotective parents.  But Claire doesn't know that history and doesn't treat Lizzy like she's fragile.  Instead, she takes her into Philly and shows her how much fun they can have with fake IDs.  But as brave as Claire seems, it is obvious that she has fears and secrets as well.  And when Lizzy finds them out, it ends up destroying their friendship.  At the same time, Lizzy also seems to be losing her boyfriend Matt to secrets revealed.

While this drama comes together nicely in the end, it’s a convoluted story lacking much coherence along the way.  The theme (everyone has secrets that they are willing to lie for) is pretty thin upon which to hang this period piece on growing up on the Main Line in the Eighties.  The Eighties details are pretty perfunctory, picking up scattered tropes from across the decade – mostly set in 1988-89, but not in any consistent way.  The whole thing is probably autobiographical or at least based on personal experience, which is fine if there is a story there, but in this case there is not much.
Posted by Paul at 11:47 AM