The Gone Away Place, by Christopher Barzak 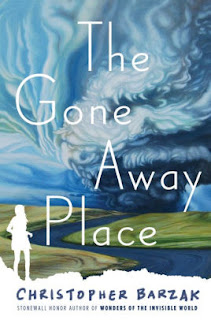 An atmospheric disturbance that spawns several huge tornadoes rips apart Ellie's hometown, wiping out most of the structures and killing nearly all of her close friends.  In the aftermath, Ellie struggles with guilt, both for surviving when so many did not and for never reconciling with her boyfriend over the fight they were having the morning of the disaster.  In the weeks that follow, Ellie becomes aware that she can sometimes see victims who are dead.

Not only see the dead, but she can also actually communicate with them. She has the opportunity to visit with her late friends, help them reconcile to what has happen, and assist them (and her) in letting them go.  But the person she most wants to see and with whom she most needs to reconcile -- her late boyfriend -- is the one she cannot find.

A strange novel that struggles a bit with what it wants to be.  At its heart, this is a novel about grief and recovery.  One of the most interesting parts of the book, before it veers into the supernatural, is simply recounting how physical recovery works after a natural disaster of this magnitude.  And then, the book moves on to the emotional struggle with such a great loss of life.  The ghosts represent a furthering of that, but then the story starts to suggest more sinister activity with ghosts taking possession of the living.  This latter source of drama seems headed for some sort of violent showdown, but it never quite develops.  The resulting storyline is meandering, as if the story has had a number of different endings and the author never quite cleaned it up.
Posted by Paul at 4:00 PM