The Love & Lies of Rukhsana Ali, by Sabina Khan 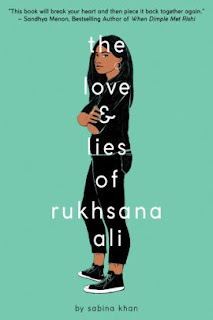 Rukhsana is a good girl who loves her Bengali culture, its cuisine, and her family.  She tries hard to please her mother and father, but it hurts that she can't be open with them.  Telling them that she is gay is simply something one doesn't do.  And this proves prescient when her mother discovers Rukhsana's romantic relationship with her girlfriend Araiana, and her parents totally freak out.

They trick her to return to Bangladesh with them and then literally imprison her to force her to marry a man of their choosing.  Desperate to escape, she finds an unexpected ally in her grandmother who reveals a set of family secrets which open her eyes.  Through great difficulty, things are sorted out.

The story, which reminded me strongly of Aisha Saeed's Written in the Stars, goes a bit further and in a slightly different direction.  First, because it deals with a homosexual relationship; and secondly, because the family is eventually able to reconcile.  This goal presents literary challenges to Khan as she has to work out a plausible way to get the family to turn around.  The resulting story is not entirely successful and relies heavily on the parents seeing the error in their ways.  In fact, the most frustrating part of the book is that, while Rukhsana learns a number of things to make her more sympathetic to her mother (out of pity), there really is very little growth in her character.  The weight of the character growth falls on everyone except Rukhsana -- who grows very little through her experience.  I think there was room for everyone to do some development.

While there are many good features of the novel, Khan's writing is a bit rough and the book grows dully repetitive.  Every food item is mouth-watering, every discussion ends in tears, every argument results in someone (usually not Rukhsana) apologizing.  I did like the characters themselves who, while not entirely shucking stereotypes about South Asians, were distinct and complex.  And I loved the many cultural details (Khan really enjoys the cuisine and the clothing and never tired of describing both in ways that make one hungry and covetous).

[Disclaimer:  I received an ARC from the publisher in exchange for an unbiased advanced review.  The book, originally slated to be released on January 1st, is now scheduled to be available at the end of January]