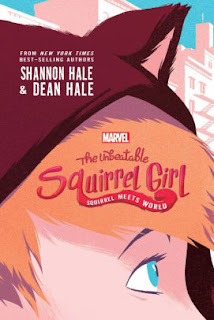 Moving from California to New Jersey is difficult for fourteen year-old Doreen.  First of all, she has to hide her big fluffy tale to avoid notice from the other kids.  Her ability to leap into trees and talk to squirrels is probably also best left out of sight.  But no amount of super talents can counter the fact that the kids are not very friendly in New Jersey and neither are the squirrels!  Using her regular girl powers, she tackles the first problem.

But there is also danger afoot -- the type of danger that only a superhero can solve.  The Avengers are not particularly interested in helping (despite some intervention from the squirrels), so it will fall upon Doreen to step up as Squirrel Girl!  Someone is trapping squirrels in gruesome cages, hurting dogs, kidnapping babies, and trying to destroy their suburban town.  Aided by both tree and ground squirrels and her classmates (dubbed the "squirrel scouts") they take on SG's nemesis, the Micro Manager!

While I didn't know it before I started reading the novel, the character is based on a classic comic book.  Being ignorant of that fact, I really liked the way the book started where Doreen is just a somewhat gawky middleschooler with a big secret.  Our introduction to the squirrels is also particularly funny.  And the regularly interspersed footnotes provide lots of snarkiness and humor.  But when the superheros and villains start to appear (i.e., the comic book elements), my interest in the story evaporated.  For most of the latter half of the book, we are treated to a number of in-jokes about Marvel characters (Avengers, in particular) and the sort of silly ultra-violence that fills most movie screens these days.  Not only did I find it dull, but also that split focus leaves the story really struggling.  Is it superhero adventure or is it just poking fun?  In any case, it didn't really work either way.  I honestly didn't see the point, but apparently the commercial success says otherwise.
Posted by Paul at 10:54 AM