Things Jolie Needs to Do Before She Bites It, by Kerry Winfrey 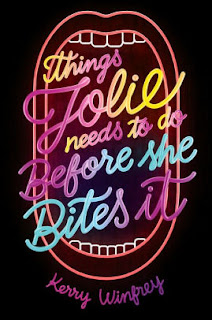 Jolie has an underbite.  It's made chewing difficult and can be quite painful, but most of all, it's made Jolie shy and averse to being seen in public.  But right after eleventh grade, she is having surgery to correct it. And when she does it, she knows that it will change everything.  She’ll no longer have to hide, she’ll fall in love, and she’ll finally be able to compete with her perfect older sister Abbi.  But she’s also afraid of the possibility that it could  all go very bad.  She might even die!  At seventeen  So, with help from her friends Evelyn and Derek, she drafts up a list of things she wants to do before surgery in case she doesn’t survive.

One of the goals (to kiss her crush) obligates her to try out for the school musical.  Prior stage experiences have gone poorly and she's terrified of appearing before people.  But to her surprise, she is cast as the lead and has to face her fears.  Other parts of her plan go astray.  Getting the chance to actually spend time with her crush (he’s the male lead) teaches her that maybe she doesn’t like him as much as she likes her loyal best friend Derek.

Well, there’s not a lot new here.  The story of the girl who wastes a whole novel searching for Mr. Perfect, when he is actually her best friend all of the time is old hat.  Throw in a school play, a drunken cast party complete with vomiting on your friends, and the female BFF who gets neglected because you're obsessed with a boy.  Oh, and add in a pregnant older sister -- why not?  I’ve read this story a dozen+ times before.  The oral surgery angle was interesting and different, but there simply isn’t enough here to justify another run at this tale.
Posted by Paul at 4:35 PM