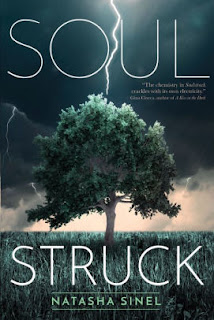 Rachel’s mother believes that she developed the talent to be able to see a person’s “soul mate” after she was struck by lightning.  The experience also prompted her to found a support group for lightning strike survivors.

Rachel, jealous of how much attention her mother lavishes on her group, has grown obsessed with getting struck by lightning too.  It seems like the only way for Rachel to get noticed by Mom.  Rachel would also like to know more about her father (who Mom alleges was her soul mate) but Mom has always refused to go into much detail.

While clearing out the junk in their garage one day, Rachel discovers an old box which contains clues about the past.  And when Rachel starts snooping through it, she discovers that her mother’s rosy-colored recollections are not even true.

A character-rich story in a picturesque setting (Cape Cod) with just a small touch of magic and lot of complicated relationships.  Just about every character in the story is complex enough to relate to the others in different ways.  Being set in a small town, it makes sense that everyone knows everyone and their histories are partly shared and partly unique. There’s also a certain fluidity as friendships wax and wane throughout the novel. It’s a rich enough story that a re-reading might be justified.  For me that would be too much work, but I admired the writer's effort in creating something so sophisticated.
Posted by Paul at 11:22 AM