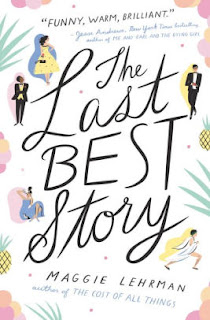 Rose is the star reporter for the school paper and Grant is the equally dedicated editor-in-chief.  While they've never dated, they have nonetheless been inseparable through the years.  Rose kept hoping for something to happen but Grant was so obsessed with the paper that he couldn't see the romantic potential in front of him.  Frustrated with that, she quit the paper (despite his dogged attempts to get her to stay on).  The romance seems lost.

Then, at their senior prom, an active shooter alert and subsequent school lock-down brings them back into each others' orbits.  Unable to fight the appeal of getting an inside scoop, they team up to cover the story as it unfolds.  In the process, they find each other.

A fast-paced romance and mystery combined together. As an avid fan of Gilmore Girls I couldn't quite rid my brain of the image of Paris and Doyle as the inspiration for the two protagonists here (it actually works pretty well in this case!) which gave the book some appeal.  But as the rather crazy plot would suggest, this story is all over then place.  It manages to get the various threads tied up by the end, but it's a confusing ride.
Posted by Paul at 9:28 AM