The Other F-Word, by Natasha Friend 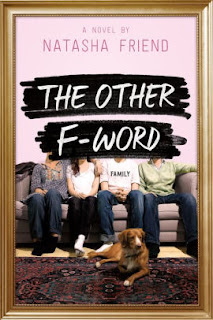 Milo is violently allergic to a wide variety of food and he'd like to understand why.  The doctor thinks it's genetic, but his Mom doesn't have the mutation.  That leaves his Dad which is a bit of a challenge, because Milo has two mothers and his Y chromosome came from a sperm donor.  The good news is that the donor indicated on his profile that he was willing to be contacted. Now, Milo just needs to work up the courage to reach out.

Milo already knows a half-sister (through the same donor), Hollis, who he met when they were kids, but they didn't stay in touch and reconnecting is awkward.  Still, it seems easier to have an ally before contacting their father.  Hollis has her own issues and is reluctant to join Milo's quest.  But he wins her over and as they start the process they discover that there are more half siblings out there.  The four teens, while struggling with their feelings about their shared father, find bonds between them.

A thoughtful and thought-provoking story about family ties in non-traditional families and the emotional stresses associated with IVF.  Friend doesn't take any of this very far (just lightly touching on the stresses between parents or the tendency for children conceived through donors to be more prone to delinquency and emotional conditions), but she does work it in.  The far more important story about how a group of four young people who have grown up separately find a bond based solely on an absent member of their "family" both confirms the power of a genetics and simultaneously subverts it by showing the stronger connection through common adversity.  In the end, the sperm donor becomes inconsequential to their experience and to the story.
Posted by Paul at 10:42 AM