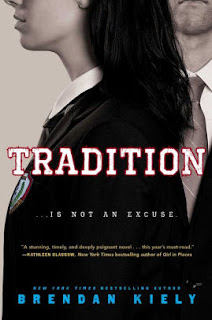 Jamie Baxter is the type of kid who doesn’t get second chances and after a near-fatal incident on the football gridiron, his career prospects seem bleak.  But his coach manages to pull in some favors and slips him into the elite Fullbrook Academy on a full scholarship to play hockey.

Jules is much more at home at a rich person's prep school like Fullbrook, but after three years the place doesn’t seem so gleaming and pristine anymore. She's disgusted by the way that boys get to be boys and the girls are mostly added on as an afterthought.  Dozens of the school's traditions are, as one character puts it, in place to “benefit the boys and not the girls” and she wants to fight back.

For Jamie, the recent arrival, it is a surprise to see what privilege is associated with these wealthy kids, but it is the sexism of the students and the staff that eventually push him over the edge.  And Jules’s little rebellions eventually escalate to one grand gesture to take a stand against tradition.

There’s not much subtlety in this grueling account of white male privilege and twisted notions of consent.  While the general ideas made me think hard about my own experience in private schooling, the ideas are handled here with a sledgehammer.  That makes for entertainment (if the subject of sexual assault and objectification can be considered light reading) but it doesn’t lead to much reflection on the subject matter.  That will probably be left for anyone who wants to discuss the book afterwards but there isn't much gray area here.
Posted by Paul at 11:14 AM