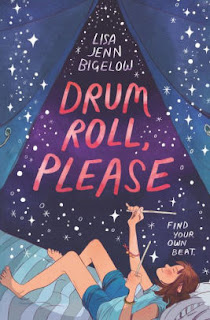 Melly gets called "mouse" by her friends and family because she is usually so shy and quiet.  But put her behind a drum set, and she can become quite loud.  Her best friend Olivia talks her into going with her to rock band camp during the summer.

It starts off inauspiciously as Melly's parents, on the night before camp starts, announce that they have decided to get a divorce.  Things grow steadily worse as she and Olivia are separated at camp and Melly ends up assigned to a wildly incompatible group to play with.  Worst of all, Olivia has fallen for a guy in her group and doesn't have time to spend together anymore, just as Melly needs her friend most!

Alone and lonely, Melly learns to make new friends and makes a few self-discoveries along the way.  With the help of a band mate, the independent Adeline, Melly makes tentative steps towards standing up for herself and working out how to be both a good friend and good to herself.  In the end, she also builds a better understanding of how to deal with her parents and changing family.

A pleasant and fulfilling middle reader that addresses a variety of interpersonal relationship issues in a realistic fashion.  This includes not only friendship and family, but also Melly's nascent sexual orientation -- a subject that it handles sensitively and age-appropriately.  Placed by Bigelow within the context of how feelings between even boys and girls are so undeveloped at this point, Melly and Adeline's exploration of their feelings for each other feels similarly tentative. These are kids for whom holding hands and kissing are still wondrous (and scary). Bigelow captures that innocence respectfully.
Posted by Paul at 4:08 PM