Last of Her Name, by Jessica Khoury 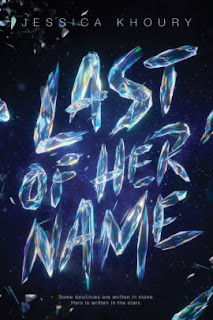 Stacia and her best friend Clio, along with their friend Pol, have been inseparable on their quiet agricultural planet on the far reaches of the Union.  Stacia dreams of excitement and seeing the kinds of spaceships she’s only ever seen on holo displays.  So, when an elite astronika spaceship appears in the sky and lands nearby, Stacia is excited.  That is, until troops round up everyone.

Something big is happening in this quiet corner of the galaxy, a fact which is reinforced when the Direktor Eminent Alexei Volkov -- ruler of the Union -- himself appears.  He announces that Princess Anya Leonova, the youngest member of the royal family, all of whom were allegedly killed sixteen years ago, is in fact still alive and living here on Stacia’s planet.  Volkov wants her found and starts a violent campaign to rout her out.  Along with the others, Stacia wonders who she is.  She is shocked when she herself is accused of being the lost princess.

Soon enough she is fleeing for her life, finding friends along the way to help her survive from one crisis to another.  There are loyalists still trying to support the Leonov line and Volkov and his Union baddies trying to capture her.  Both sides are convinced that Stacia/Anya holds the key to finding the Firebird (an instrument which could grant the holder the ability to control the universe).  Both sides are ruthless in their search for it and for her.  A high body count and lots of near-death experiences ensue in this fast-paced but lengthy sci-fi adventure.

Khoury has fun using a lot of Russian-sounding names and Russ-lish words in the story.  It’s a cute motif, but more than a bit distracting when you speak the language and happen to be an expert on Russian names.  It's obvious that she’s chosen random words and tossed them in.  That’s a wasted opportunity as using words with meanings would have added a nice layer of complexity.  But I will acknowledge that I’m uniquely sensitive to that flaw.

I liked Stacia as a character and her major sidekicks (Pol, Ryan, and Mara) have useful supporting roles.  Everyone has a unique contribution to make.  But this is an action story and characters are mostly disposable (most of them are not only killed off, but several are actually killed off twice!). Nothing drags more than when Khoury fans the romantic flames and tries to heat up things between Stacia and Pol.  Such quiet moments are mostly a distraction in a story that rarely slows down for much else.  Some nice attempts at the end to point out that love triumphs over hate in the long run are hastily added, but really life is too cheap in this story for that message to mean much.

[Disclaimer:  I received an ARC for this book from the publisher in return for an unbiased review.  The book is scheduled for release on February 26th]
Posted by Paul at 2:49 PM