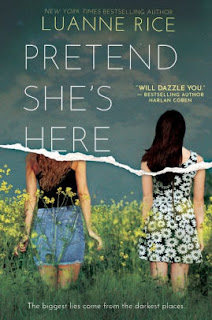 Ever since her best friend Lizzie died from cancer, Emily’s felt a distinct pain she’s felt unable to explain to others.  Except perhaps for Lizzie’s mother, who seems as bereft as Emily.  There were times when she really wanted to tell Lizzie’s Mom how much Lizzie meant to her, but after the funeral, Lizzie's family moved away. So, when Lizzie’s family (Mom, Dad, and little sister Chloe) come to town to pay respects at the grave, Emily is only too happy to accompany them to the cemetery.  But then, to her surprise, they kidnap her.

Imprisoned in a basement room which has been mocked up to look exactly like their late daughter’s old bedroom, the family forces Emily to change her appearance, to dress like their late daughter, and to participate in a charade of pretending to be Lizzie.  Threatening to hurt her and her mother if she doesn’t cooperate, Emily fights to maintain her sanity.

A brisk and generally satisfying psychological thriller that struggles with the plausibility (or lack thereof) of its premise.  Rice spends so much time trying to explain how any of this could happen that the story sometimes suffers.  The scenes with Lizzie’s Mom are sufficiently creepy but go off the rails as her character does as well.  The attempt to explain how Emily could end up being so cooperative mostly falls flat.  The culprit in both cases is the length of the story.  The longer it runs, the harder the coherency is to hold together.  A lengthy postscript “Part Two” doesn’t add enough to justify its inclusion and does the story no favors.

Rice does best at her characters’ interactions, whether it is Emily and Chloe, Emily and her boyfriend Casey, or Emily and Lizzie (in flashbacks).  This has been her strength in her other novels as well, so again I'm back to being hung up on the story itself.  As compelling as this premise was, the strain of keeping it together really drained the writing of its strengths.

(Disclaimer:  I received an ARC for this book from the publisher in return for an unbiased review.  The book is scheduled for release on February 26th]