The Last to Let Go, by Amber Smith 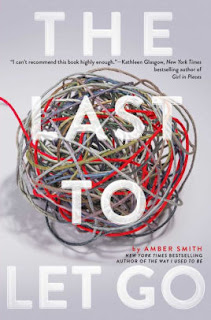 When Brooke sees police cars outside their home, she’s convinced that her abusive father has finally killed Mom.  Violence has become so routine in their house, that it wouldn't come as a surprise.  She is shocked to find that instead it is her mother who has killed her dad.  Not that the aftermath is much different.  Her mother is locked up and the kids have to muddle through without either parent as the case goes to trial.  Brooke, as the middle child, takes the brunt of the worry and care for keeping the remains of the family together.

This was supposed to be a special year for Brooke – starting at a new school and taking a slew of advanced classes -- but as her family falls apart, all of these things seem unimportant.  Tangled up in this mess is the way that her feelings for a new supportive friend may (or may not) be sexual and dealing with that awareness seems too much to take on top of everything else.

In many ways, Brooke is the type of character I hate – self-pitying, lying, and too proud to accept help – but for reasons I can’t fully articulate, I cared about her enough to want to read her story.  Some of that is due to the extraordinary circumstances of the story itself.  But I think there is an element of grit to her that I respected.  And maybe also a desire to see her triumph in the end. I was thus disappointed when the story neatly resolves without dwelling on steps involved in reaching that resolution.  It was an awful lot of build up for a wave-of-the-hand solution!