The Opposite of Innocent, by Sonya Sones 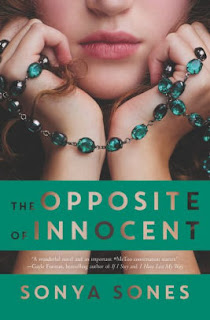 When Lily was a little girl, she announced to her father’s best friend Luke that she wanted to marry him.  Luke promised her that he would wait for her and everyone had a good laugh.  Years later, Luke comes back for an extended stay with her family.  Now a teen, Lily finds that she likes him, obsessively in fact.  And when he reciprocates her affection, she’s thrilled.  But the fifteen-year gap in their ages is only the beginning of their troubles.  Lily quickly finds that Luke’s interest in her is not the sweet romantic fantasy she has in mind, but something darker.  And when she attempts to break it off, he threatens and coerces her.

While novels in verse are more frequently misses than hits, Sones is an outlier in the genre, producing really powerful novels that combine strong verse and vibrant topics.  As the genre is prone to, she can be melodramatic (and more so with a topic like this where the “ick” factor is quite high).  But the novel is blessed by well-written verses (several of which could easily have stood on their own).

The story is not in itself original, but I liked the characters and appreciated the major role she gave to Lily’s friends (who could have easily been throwaway roles).  The plot is dragged out a bit by making Lily particularly resistant to seeking out the help she is offered early on – a decision that Sones herself feels compelled to criticize in the book’s afterward.  I so wish that authors would find a better way to meet their contractual length requirements than having their protagonists make bad decisions!
Posted by Paul at 12:32 PM