The War Outside, by Monica Hesse 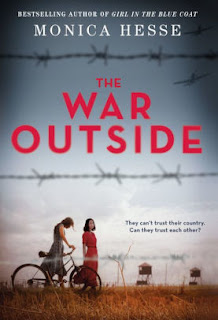 A historical novel is most satisfying when it either addresses some familiar event in a new way or finds an event that is largely unknown and brings it to life.  This novel falls into the latter category.  While the internment camps that West Coast Japanese were sent to during WWII are pretty well publicized, the camps for enemy aliens are less well known.  And the idea that a camp existed in Texas where both Japanese and Germans were imprisoned (with their families) for crimes that were never proven in court is an eye-opener!

Haruko doesn't understand why her father was arrested.  He refuses to even discuss the matter with her.  But when he is sent to the Crystal City camp in Texas, her family decides to follow him.

On their arrival, she notices Margot, a German-American girl who has already been in the camp for months.  Her father's "crime" (attending a Nazi meeting as a favor for a friend) is better understood, but she faces different problems.  Margot's mother is having a difficult pregnancy amidst primitive medical facilities.  And her father struggles with boredom and the temptation to join with the camp's Nazi sympathizers to pass idle time -- an idea that horrifies Margot and her mother.  In the midst of this madness, Haruku and Margot form a friendship that attempts to reach across the racism and prejudice of the time.  But in the end, they fall victim to a tragic series of events.

This moving (and horrific story) combines strong characters and extraordinary circumstances to create a real page-turner.  The ending is haunting and unforgettable and it is a truly astounding work.  Historical notes at the end discuss which parts of the story are fictional and which are based on facts.  A surprising amount of the story falls into the latter category.
Posted by Paul at 2:03 PM