After the Fire, by Will Hill 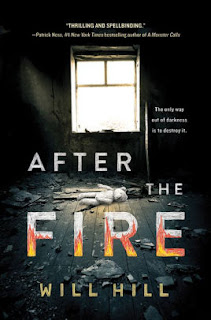 After living nearly her whole life inside the compound of the Lord’s Legion and believing with all of her heart that Pastor John was the divine messenger of God, seventeen year-old Moonbeam must find a way to cope with her return to the outside world.  The compound has burned to the ground and everyone she knows (with the exception of a handful of other children) are now dead.  Held in a rehabilitation facility with the other survivors she struggles to understand what happened to her and explain it to her therapist and to an investigator.  A harrowing tale of abuse, torture, and suffering pours out of her.

Obviously inspired by David Koresh’s Branch Davidian cult, Hill touches on many of the key features of that group and their fate.  And despite his protestations to the contrary, there is a slightly exploitative feel to the story.  Hill never gets explicit but he doesn’t shy from suggesting all manner of horrific and traumatizing events.  For what actual aim?  A non-fiction account would have provided a similar picture of the combustible combination of madness, messianism, and the gullible nature of lost souls seeking truth.  What is the point of fictionalizing it?
Posted by Paul at 9:49 AM