Always Never Yours, by Emily Wibberley and Austin Siegemund-Broka 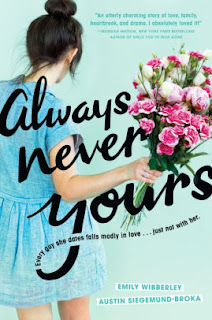 Megan Harper seems to have an uncanny ability for finding the perfect guy and losing him to someone else.  She's always the girlfriend right before the perfect couple met.  And while it's great to see your friends so happy, just once she wishes it was her in the perfect relationship!

Otherwise, Megan is content to be a behind-the-scenes gal.  She's made a name for herself directing for the school's drama group, but if she's going to attend drama school after she graduates this year, she has to do some acting as well.  So, grudgingly, she tries out for the school's production of Romeo and Juliet.  To her surprise and mortification, she is cast in the lead role.

That brings up some headaches as one of her ex-'s has been cast opposite her.  Soon enough it's hard to differentiate between the drama on the stage and what is going on backstage.  One thing is certain: Megan's romantic life is a mess and not for lack of trying.  Megan is fearless and not afraid to go after what she wants.  Now, if only she could figure out what that was!  And while the story is set against the tale of star-crossed teen lovers, the plot reminds one much more of Much Ado About Nothing.

I'm not entirely convinced that the world needs another YA romance that takes place during a production of Romeo and Juliet.  I get that young readers are more likely to have read it than any other of the Bard's works, but it's such an overused device at this point.  That said, this is a charming tale mostly because of its very unfussy look at romance and sex (yes, there's a fair bit of that in this book).  In the past, a character like Megan's would have been slutshamed (or at least her sexual history would have been the story), but here that potential plot line is quickly tossed aside.  Megan herself is having none of that.  She's loved well and no one is going to make her feel bad about it!  Being sex-positive in adolescence might be wishful thinking, but the only way to create that view of the world is to start writing it and the literary duo behind this novel mean to try.

With sex unimportant in this story, more tried-and-true themes of friendship and loyalty stand out front and center.  As for plot, Megan's growth from wallflower to assertive, proud, and brave young woman provides a very satisfying dramatic arc.  The result is a step up from simple light romance reading, but with nothing too heavy to weigh you down.  This is pop with substance.
Posted by Paul at 7:39 PM