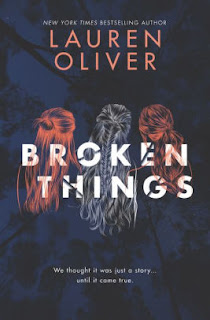 It was the crime of the century in Twin Lakes, Vermont.  A girl named Summer is brutally killed in the woods.  When news that the killing eerily resembles a ritual killing described in a fan fic sequel to the fantasy novel The Way into Lovelorn which Summer and her friends Brynn and Mia were writing, suspicion falls on the survivors. Brynn and Mia were eventually cleared, but the real killer was never found.

Now on the anniversary of the death, Brynn and Mia stumble on new evidence that leads them to investigate the case on their own.  Doing so, they relive the days leading up to the death of their friend and uncover uncomfortable truths that they have buried about their friendship with the victim.  Alternately narrated by Brynn and Mia and in both the present and flashbacks to the past, the unfolding story tells of friendships, jealousies, and secrets long buried.

At times creepy (with a pretty traumatic ending), this is a classic mystery embroidered with the subplot of the girls' overactive imaginations.  The idea of team writing a fan fic that becomes the blueprint for murder is intriguing but I'm not entirely sure where Oliver wanted to take it.  Obviously, showing the whole thing as an obsession would have helped but in comparison with real obsessive compulsive behavior (like, for example Mia's hoarding mother), the storywriting never really comes off that way.  The idea seems unfinished and incomplete.  So, I was left not really feeling the inevitability of the story's ending. And the pull that the victim Summer had over her friends, while mentioned repeatedly, is never sufficiently illustrated.  For a psychological thriller that's pretty critical motive to build!
Posted by Paul at 3:26 PM