In Some Other Life, by Jessica Brody 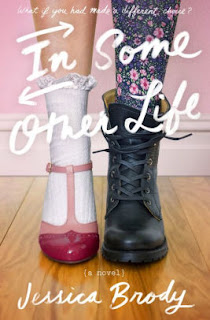 Kennedy always wondered what her life would have been like if she had gone to Windsor Academy instead of public school.  As far as anyone else knows, she didn't exactly have a choice in the matter:  her application was turned down.  The truth though was actually more complicated:  she chose to not go so she could stay with her new boyfriend Austin.  Three years later, she is on the verge of getting accepted at Columbia, winning an award for the school newspaper, and happily still together with Austin.  Maybe she didn't need Windsor to be happy and successful after all?

But then it all goes wrong.  She finds out Austin is cheating on her  with her BFF and she blows the interview with Columbia.  Realizing that she made a terrible mistake with her life, she turns back to Windsor in desperation, begging them to take her in.  While at the school, a freak accident finds Kennedy transplanted into an alternate reality where her dream has come true -- a world where she chose Windsor instead of the boy three years ago.  A world, she comes to realize, that is no more closer to perfection than the one she came from.  And one where the costs are much greater than she expected.

The story could be passed off as trivial, but proves surprisingly deep in its exploration of the cost of dreams.  The alternate worlds idea is pursued more as a literary device than some sort of sci-fi fantasy concept -- a chance to illustrate that every choice has consequences and that there is rarely a right decision.  Add excellent writing with strong characters and you get a truly enjoyable read.  I raced through this book, reluctant to put it down.
Posted by Paul at 9:18 AM