Me and Me, by Alice Kuipers 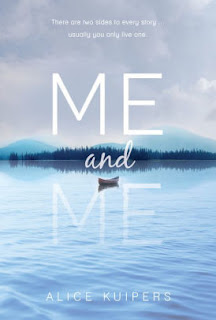 Lark and her boyfriend Alec are canoeing on the lake when they hear a little girl crying for help.  They both jump into the water to save her but Alec hits his head on a rock and is knocked unconscious and starts to drown. Now there are two people who need saving and there doesn't seem to be enough time to save both of them.  Lark makes a decision that will change her life.

But does she?  One Lark chooses to rescue Alec and an alternate Lark chooses the little girl.  Both decisions have consequences, but the aftermath is not that simple.  In the weeks after the accident, she starts receiving strange messages on her phone – messages that seem to be coming from a parallel world.  A rift between these alternate realities needs to be repaired for things to be made right.

An interesting idea for a story but I couldn’t get into the execution.  Kuipers’s strength is dialogue and she sticks mostly to it, not bothering with much narration.  That makes for a jumpy story that can be exhausting to track.  Add in the odd tracking of parallel stories that are based on subtle differences and similarities.  It’s a lot of work and the conclusion is particularly enigmatic – a challenge that I couldn’t bring myself to care about.  A fun idea but a difficult read.
Posted by Paul at 10:55 AM