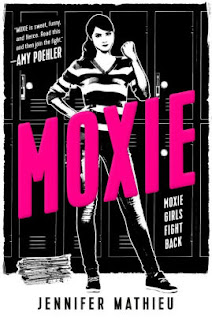 In East Rockport, TX, school is hell.  And if you're not a football player (and especially if you're a girl), it's far far worse.  The school is full of lovely "traditions" that exalt sexism.  A blind eye from the administration ensures that the hostile environment is allowed to persist.  But rather than tolerate this, quiet Vivian decides to fight back.  Inspired by her own mother's rebellious past, Vivian channels the Riot Grrrl subculture of the 1990s and produces a series of underground zines calling out the injustices present at the school.  She keeps her involvement a secret and is surprised when other girls join in and take her initiative much further than she could expect and it becomes a movement.

A well-paced novel that tells a great story of teens standing up for what they believe in and also tackles a number of important issues about race and class (as well as sexism) along the way.  The villains are a bit thin and the resolution done in flashback, all of which makes the ending a let-down, but the story along the way is fun.  The zines themselves (reproduced in full) are a great addition to the story and I'm glad they were included in the book.
Posted by Paul at 2:44 PM