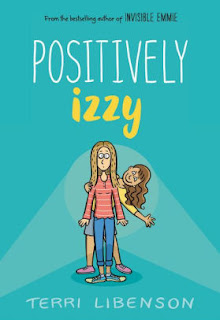 Another graphic novel from Libenson, the creator of Invisible Emmie (reviewed back in December).  This one traces two girls in middle school who are having problems with self-identity.  Izzy is creative, with a flair for the dramatic, and excels on the stage.  Her issue is that she has trouble focusing on her schoolwork and chores.  Briana couldn't be any more different:  she's smart and hardworking, but tired of having nothing special to make her stand out.  When her mother (the school's drama teacher) asks her to substitute for one of kids who's gotten sick, she's terrified to be on the stage, but it might be the opportunity she's been waiting for.

There's a very subtle twist in the story that is not fully revealed until the end and might even then be missed by careless readers.  Catching it makes the difference for this book, an otherwise unremarkable story of kids pushing boundaries.  Overall, I enjoyed Emmie more than this one as the earlier book had more to say and was quite a bit funnier.
Posted by Paul at 11:08 AM