The Lady's Guide to Petticoats and Piracy, by Mackenzi Lee 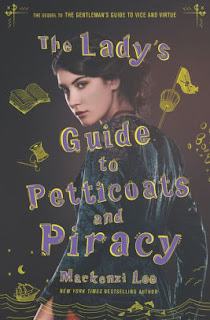 Felicity Montague has been waging a helpless fight against the stodgy physicians of Edinburgh, trying to convince them to let her study medicine.  But attitudes in the 18th century are calcified around the idea that a woman has no place in a surgery and no one is willing to let her study.  Her last hope would seem to be to entice an eccentric doctor named Alexander Platt to take her under his wing.  But to do so, she must travel to Germany, where he is about to be married -- coincidentally, to her nemesis (and former BFF) Johanna.  When Johanna goes missing from her own wedding, the adventure broadens and soon Felicity is stealing old drawings, hanging with pirates, and seeking out sea dragons -- all in the name of her prospective medical career.

A rollicking good time that plays fast and free with history and inserts an irreverent modern sensibility into its setting. The tone is generally light and, while danger is nearby, none of it can be taken too seriously. Felicity and Johanna are resourceful heroines with a strong sense of purpose.  If they speak and think more like 21st century young women, they are still rooted enough in their historical setting to at least add plausibility to their story (a point that the author valiantly stakes out, albeit missing the point that her characters still behave in an anachronistic fashion!).  I treat it as a fantasy based loosely around historical events.  It won't teach you much that is useful about the period or place, but you'll have an enjoyable time nonetheless!
Posted by Paul at 7:08 PM