This Heart of Mine, by C C Hunter 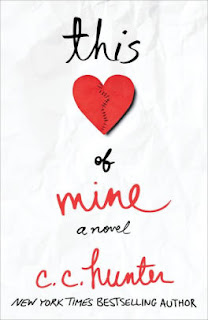 Leah has been carrying around her heart -- an artificial pump -- in a backpack while she waits to find a donor.  In a strange twist of fate, when a donor is found it turns out to be a boy who went to the same school as she does.  It's a discovery first made by the donor's twin brother Matt.

Matt is obsessed with finding his brother's killer.  The problem is that everyone -- the police included -- think that his brother killed himself and the case has been closed.  But following his intuition and a recurring dream Matt has of his brother being pursued by an unknown person. To their mutual shock when they discover it, Leah has been having the same dreams as well!  Matt is convinced that Eric is communicating with them (through a psychic bond between twins in his case and through his donated organ to Leah).

The story gets more complicated as romantic sparks fly between Leah and Matt -- a romance made strange by the fact that Leah has Matt's brother's heart inside her.  The couple mostly hides all of these things -- the identity of Leah's heart's donor, the shared dreams, and their search for the real killer -- from those around them.

It's a cute idea, but a bit thin for such a long novel. The idea that you can feel someone else inside you by having a transplant makes for a nice short story but at this length you have to take it literally and that stretches credulity.  By the end, Hunter herself has tired of the story and starts doing a literary fast-forward, giving us brief synopses of the passing days as if she can't wait to be done, which further reinforces the impression of a book that is far too long for its story.