A Sky for Us Alone, by Kristin Russell 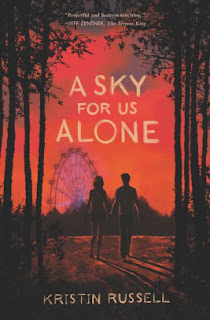 Strickland County is a poisonous place, whether it's the soil damaged by mining and chemicals or the spread of opioids among the population.  For Harlowe Compton, growing up in the midst of it all, his older brother was the shining star and guide out of this place.  So when the brother ends up dead, dumped in front of their house by Tommy Prater, Harlowe wants answers.  But this isn't exactly a safe place to go digging.  The Praters own the County (including the law enforcement) and people who cross the family tend to end up dead.  To no one's great surprise, the answer lies in the drug trade and Harlowe must come to terms with the fact that his idolized brother was messed up in it.

The investigation of what Harlowe's brother was up to is nowhere near as interesting as the setting.  Russell's nightmarish Appalachian landscape is everything we hear about the rural poor and the devastation of the population by drugs.  But the writing shies away from the stereotypes.  The vivid characters are nuanced and perfectly illustrate how even intolerable conditions can seem normal when they are all you've ever known.  Russell obviously has a bittersweet love for the people who endure this life.  The result is a haunting and realistic depiction of the place.
Posted by Paul at 1:06 PM