All Out: The No-Longer-Secret Stories of Queer Teens Throughout the Ages, ed by Saundra Mitchell 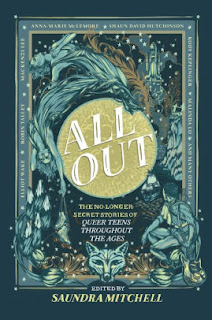 Seventeen historical short stories that share in common the idea that the protagonists are gender queer.  It's a concept that could have easily gone off the rails with authors determined to grind an ax, but that is not the case here.

These stories are historical fiction first with the characters' sexual orientation and/or gender identity largely secondary.  Sometimes the stories are simply rewrites where the romantic characters are same sex, as in Robin Talley's "The Dresser & the Chambermaid" (set amidst the splendor of the Georgian royal court) or Dahlia Adler's "Molly's Lips" (where two girls find comfort in each other at Kurt Cobain's wake at the Seattle Center).  For other stories it becomes more central to the story, as in Anne-Marie McLemore's story of a woman carrying herself as a man in the midst of Mexico's wars with France in the 19th century or Malinda Lo's stories of male impersonators in San Francisco in the 1950s.  The latter story works particularly well as it's based largely on historical fact.  The more fantastic ones, like Elliott Wake's "Every Shade of Red" (which imagines Robin Hood as a band of people with very muddied gender identities) come off a bit silly.

While the stories are generally strong and well-written, I have issues with the collection for the lack of consistent commitment to the concept.  Some authors chose to highlight moments of gender queer history and seem devoted to the editor's call to shed "light on an area of history often ignored or forgotten." Others saw the assignment as a chance to reimagine a world that never existed through a homosexual lens.  Still others just want to prove that a good story does not need straight characters.

The vast majority of the contributions are gay or lesbian fiction.  There are a few transgender stories, but these are largely cross-dressing rather than true transexuality.  Asexuality is touched upon, but not all that successfully.  Bisexuality is largely missing (aside from a brief mention).  So, while a broad array of historical periods and settings are present, the stories seem more focused on sexual orientation and are less representative of the variations in gender identity.
Posted by Paul at 2:18 PM