But Not Forever, by Jan Von Schleh 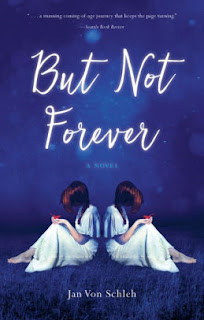 While exploring a deserted house in a mining ghost town, Sonnet finds is transported back in time to 1895. In a similar fashion, Emma, the unloved older child of a mining baron finds herself swept up from 1895 and sent to the future.  Sonnet and Emma, who physically resemble each other, have been swapped.

While the most immediate concern is how they will survive in each others’ timelines (and hopefully return to their own), Sonnet is faced with more present danger:  Emma’s mother’s antipathy towards her child, which verges on the homicidal.  Getting back home may be a matter of life and death for Sonnet, stuck in the grasp of this evil stepmother.

Time travel stories are almost always best taken with a grain of salt.  While this one avoids most of the usual paradoxes that plague the genre, it bends and twists in a torturous way to explain itself.  But the thing is that no one really cares how the two girls got where they are and/or how they will get back, they just want an adventure.  But that doesn’t stop the author from trying to explain the mechanics of how the girls got swapped in ever more confusing half-explanations.

The story too is a mess with a mixture of the main thread about restoring the continuum and a confusing subplot about family jealousy.  Various random characters are introduced and even developed, but then prove to play no consequential role in the story.  The romance is also a bit odd involving the idea that Sonnet and Emma somehow share an emotional thread that draws them to the same boy (not that even that subplot matters much in the end).  Way too many characters.  Way too many dropped story ideas.
Posted by Paul at 12:30 PM