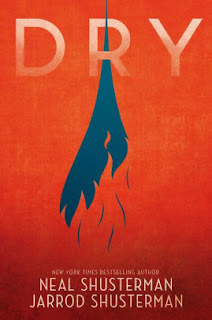 The day finally arrived when Southern California’s taps went dry.  The great “Tap-Out” they called it.  After years of using up more water than they should, the supply was simply exhausted.  Quickly, the social order starts to collapse and people have to improvise to survive.  Five young people from diverse backgrounds and with different talents and skills embark on a desperate mission to survive.

The result is a gripping adventure.  While fast-paced and action-filled, the story still has some space of vivid characters who undergo growth as they find their core values challenged by the descent into anarchy around them.  The Shustermans have a great deal of fun imagining how fast civilization could collapse if there was nothing left to drink.  The fact that they make it all sound so plausible is particularly chilling.

And in a story that could have easily become senselessly violent and exploitative, the book is thoughtful and relatively restrained.  Still, this is an intense and traumatic story about what people go through when they are desperate and on the edge of death.  Not for the faint of heart.