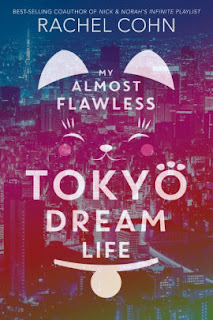 Elle is bright and used to getting good grades, but with her Mom in jail after a long descent into addiction and dealing, Elle’s life has become a hell of foster homes and abuse.  Grades have slipped and she can feel her hopes and dreams slipping away.  Only her friend Reg helps her keep it together.

Then, like a scene out of Little Orphan Annie, Elle’s absent father appears in her life.  He’s a ridiculously wealthy Japanese businessman and he wants her to come live with him in Tokyo.  Before she knows what is happening, she’s been whisked to Japan.  She ends up living in a luxurious penthouse and attending a super exclusive International High School with a bunch of other privileged kids.

AS wonderful as this all seems, the new lifestyle doesn’t suit Elle well.  Her father is largely absent, her aunt and grandmother in Tokyo despise her, the popular kids (while nice to her as long as she conforms) are mean to others in a way that makes Elle uncomfortable, and everyone is trying to convince her not to fall for the one guy who actually treats her decently.  Elle desperately needs to figure out a way to make this “perfect” life work for her.

Rather more like a travel guide than a novel, Cohn delights in describing life in Tokyo.  One suspects that she was there on vacation and wanted to create a book in which she could work in some of her crazier experiences.  The story however doesn’t gel.  Characters are introduced and developed, but largely drop out at the end.  The story meanders.  In the end, Cohn just quickly ties up all the major loose ends with the previously unreasonable adults all agreeing to be nice.  Lots of fun scenes but the story needed work.
Posted by Paul at 3:36 PM