The Me I Meant to Be, by Sophie Jordan 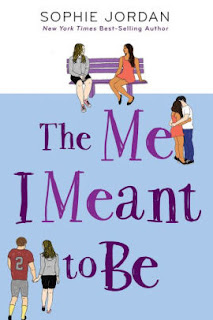 After Flor and Zach broke up, Flor's friend Willa took it on herself to make sure that the Girl Code was upheld, warning their friends not to date Zach in deference to Flor.  But when finds Willa herself in Zach's arms at a party, she's forced to question her own loyalties.  How will she ever explain what happened to Flor?  As usually happens in these sorts of novels, she doesn't run off to Flor and confess.  Instead, she procrastinates and waits until it is too late.

While Willa is off being a bad friend, Flor is rebounding and developed a crush on her math tutor Grayson.  Grayson seems to be all business and resistant to Flor's charms.  But when Flor makes a shocking discovery about Grayson's secret life, they bound over the fact that there is more to Grayson than meets the eye.

In other words, it's a basic teen romance full of a lot of cliches.  There may not be much in the way of new ground, but Jordan provides decent delivery.  I started getting optimistic when the novel questioned the idea of a Girl Code, suggesting that it was too rigid.  I was hoping for more development of the idea that there was value in girls being able to date whomever they choose (and maybe also seeing partners as something more meaningful than property).  The ideas are in fact suggested, but it's a halfhearted effort and this book remains safely by the numbers.
Posted by Paul at 10:16 AM