Come Find Me, by Megan Miranda 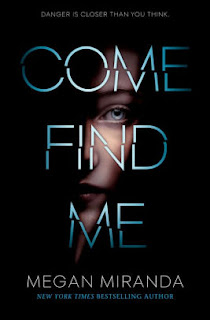 A year ago, Kennedy saw her brother Elliott fleeing their house.  Inside, her mother and her boyfriend were dead.  The evidence against him was overwhelming:  gunpowder residue on his body, his fingerprints on the gun, the lack of an alibi, and Kennedy's witness statement; but something doesn't feel right and Kennedy can't get her testimony straight.  The trial is coming up soon.

In a county next door, Nolan and his family are still grieving the disappearance of his older brother, who simply vanished during a family picnic.  His parents have dedicated themselves to finding lost children.  Nolan has turned to ghost hunting, convinced that his brother is sending him messages from some hidden place.

Two young people with mysteries that haunt their lives, but very little else in common.  They get brought together by a series of supernatural events -- someone or something is reaching out to them.  But who/what is it?  And why have they been drawn together?  Soon the messages and the mystery are sending them on a search that, while for different things, seems to follow the same path.

At times a bit hard to piece together, this is a nice suspense novel that works best while giving it less deep thought. The events that tie it together are presented in such a way that there may be something supernatural going on, but it is not required.  That turns out to be the best way to tell this story that's big on action and fairly short on character.  That's a missed opportunity as a deeper and more interesting novel would have explored the guilt that Nolan and Kennedy are going through (instead, it is stated, but never really shown). There's a little romance of course, but it mostly seems driven for the obligation that boy and girl have to kiss at some point, and not from any particular bond between the characters.  There really isn't much room in this novel for much of an emotional connection between the characters.
Posted by Paul at 4:42 PM