Even If I Fall, by Abigail Johnson 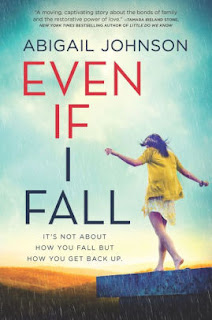 A year ago Brooke’s brother killed his best friend.  In their small town, whoever didn’t judge the family by that heinous act was eventually convinced to avoid them by the trial and the publicity.  Brooke’s little sister won’t talk, Mom can’t stop crying, and Dad has retreated to the basement to work on projects. Only Brooke and her mother are willing to visit her brother in jail (Dad and little sister outright refuse).

Brooke subjects herself to daily humiliation from her boss at the skating rink.  She does so out of guilt and because it gives her an opportunity to continue to skate (even if she has pretty much given up her life dream of skating professionally).  The only friend she has these days is a new girl in town who doesn't (yet) know of Brooke's notoriety.

But then Brooke finds a confidant, someone who understands what she and her family is going through – Heath, the younger brother of the guy that Brooke’s brother killed.  It’s an awkward friendship that has to be kept secret, a friendship that would tear their families apart if it came out into the open, and one which can never be allowed to become more serious.  And then it does.

Surprisingly low-key for such a melodramatic premise, the story has a number of tracks to it (family recovery, most importantly, but also Brooke’s search for the truth about the murder, and finally her parents’ unresolved past) that make the story complex and rewarding.  Similarly, Johnson avoids any sort of drastic resolution, settling for an ending that, while modest, feels realistic and plausible.  Characters are less developed as the pace is fast and emotions tend to run so high that we don’t get reflective moments, but I enjoyed it.
Posted by Paul at 3:17 PM