On a Scale of One to Ten, by Ceylan Scott 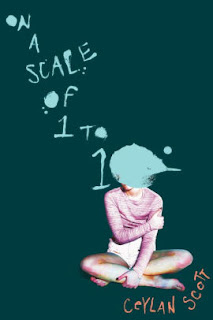 Fictional, but based heavily on the author's own experience being institutionalized at the age of sixteen, this novel traces Tamar's arrival in a residential mental health facility for adolescents and the days spent. It's a story that's been done before plenty of times, but this book stands out for its immediacy -- the author started writing it shortly after being discharged.

Unlike almost every other example of this genre, it isn't really about the healing.  After all, usually the protagonist is in denial for the bulk of the story. The great breakthrough -- usually at the end -- is her recognition of her special issue and the confrontation with her delusion.  Obviously, there is a small bit of that here, but it secondary to Scott's interest in the experience itself: how people interact, what it is like to be medicated, and the relationships with the staff.  It's not terribly dramatic.  It's even a bit hard to follow; as one would expect from a mildly psychotic narrator.

Does that make it a good book?  It doesn't have a big emotional payoff or provide any startling revelations about mental health,  but it does give a good slice of life and exposure to the world.


[Disclosure:  I received an Advance Reviewer's Copy of this book from the publisher in return for an unbiased review.  The book is scheduled to be released on May 14th.]
Posted by Paul at 3:33 PM