Picture Us in the Light, by Kelly Loy Gilbert 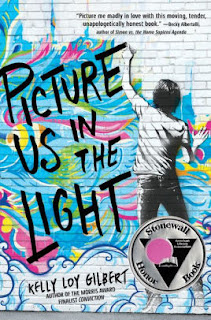 There’s always been something odd about the way Danny's parents behave.  From the way they abruptly moved from Texas to California to all the rules they have about socializing to the secrets they jealously keep. They are hiding something, but what?

When Danny’s father loses his job and the family is forced to relocate, the fabric that keeps the secrets in place starts to unravel.  Danny, who realizes that his ignorance endangers his own future, pushes back and starts demanding to know what is going on.  The more he learns, the worse everything becomes.

A startling story of the cost to a family of parents who have secrets too dark to share even with their son.  It starts very slowly and the writing is so dense that I almost gave up, but I’m glad I persisted.  As I acclimated to the writing style, I found it more and more rewarding.  There’s a lot going on in the story.  Thankfully,  it mostly comes together in the end.

I particularly like the complex relationships, whether between Danny and his best friend Harry (whose affection for each other is probably one of the most underplayed gay relationships in YA) or between Danny and his parents (much more tragic).  While following some of the stereotypes of Asian families, it bends those stereotypes.  What appears stock up front (like the parents' obsession over Danny's future) proves to be complex as the story unfolds.  The ending, while overly rosy, is immensely satisfying and well-earned.
Posted by Paul at 2:41 PM