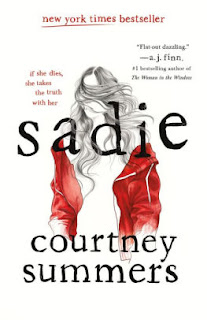 Shortly after her younger sister Mattie is murdered, Sadie skips out of town.  She's looking for a man, one of the ex-boyfriends of her mother. And she intends to hurt him.

An investigative reporter researching the murder becomes interested in Sadie's own story and tries to track her down.  Told in chapter alternating between Sadie's trip and the reporter's chase, the mystery of Mattie's death and Sadie's obsessive quest unfolds.

The story ends in just about as much of a mystery as it started.  In between it's an interesting ride, but certainly not an uplifting tale.  The settings are dreary and gritty and almost no one is all that appealing.  I found the reporter particularly annoying and whiny.  For more interesting was Sadie herself, who comes across as hardened and even a bit cruel.  It's immersive, but didn't find much of a purpose to the story.
Posted by Paul at 2:34 PM