Spindrift and the Orchid, by Emma Trevayne 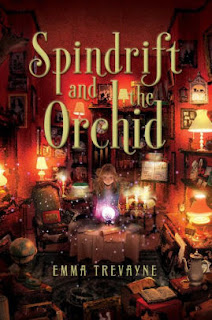 When Spindrift washed ashore after the sinking of her parents’ ship, she was found with a defective crystal ball.  Unlike the balls in her grandfather’s magic shop, this one appeared to do nothing.  Nonetheless, Spindrift kept it as a memento of her drowned parents.  Then one day the ball reveals a flower inside of it -- a black orchid that blooms in front of her.  The flower in turn becomes a magical woman who grants wishes.  Any thing -- as long as it is an object (and not a person) -- that Spindrift wants, the woman will give Spindrift.

With help from her grandfather, Spindrift learns that this ball is one of seven – each of a different color and each with a different power.  She also discovers that the balls and their orchids are being hunted down by Roland, a former member of her parents’ crew, whom she also suspects of being responsible for their death. Following clues left in her mother’s correspondence with her grandfather, Spindrift and her young friends try to locate the orchids before Roland can collect them all together and wield immense power.

A challenging story to follow, Tremayne has many great ideas but few of them are developed (orchid hunters, the legend of the seven sages, the nature of greed, the idea that the balls are associated with particular families, magical wings that allow the children to get around, etc.).  Spindrift’s journey is novel enough, but these loose ends and holes give it a feeling of being unfinished.  This not only affects the strength of the story, but also the development of the characters whose importance to the story is never really explained.  Spindrift's friends are disposable and distracting.  They didn’t contribute much.
Posted by Paul at 3:26 PM