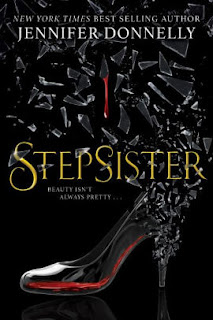 How much thought have you ever given to Cinderella’s ugly stepsisters?  The ones who (in the original version of the story) chopped up their feet in a failed attempt to fit into the glass slipper?  And after poor Ella went to live happily ever after, what happened to them and their equally odious mother?  “Good riddance!” was probably the lesson we were all supposed to take from their example.  There was nothing to like in them.  Rather, we were taught that Ella’s humility and her beauty made her the victor.  And the great prize at the end of the day was to be the prince’s trophy wife.

Rewriting Ella’s fate (or how she achieved it) has been done many times before, usually with a focus on empowering Ella as even more virtuous and strong (often at the expense of the vain fashion-conscious stepsisters).  But this novel takes a different path, positioning the stepsisters as victims of societal pressure and an overly ambitious mother, and suggesting that Ella’s passive acceptance of Chance or Fate (take your pick!) is not really the path to living happily ever after.  In this retelling, the stepsisters never did have a chance, twisted as they were by jealousy and the expectation that they should do whatever it took to score a husband.  The story goes further, providing a backstory that the three girls, before any of these expectations had been imposed, lived together in innocent friendship.

Much like Damsel (a novel I reviewed a few weeks ago), I was intrigued by the novel direction of the story and dove into the book with high expectations.  Unfortunately, after introducing her critical ideas, Donnelly runs out of steam and turns her heroine (the elder stepsister Isabelle) into a sort of fairy-tale Katniss.  There’s an entirely unnecessary diversion into Herstory to lay out the fact that female warriors are so often written off and then it goes full-blown silly as the three sisters reconcile and defeat evil.

But if one ignores the heavy handed implementation of the premise and the action-packed and vapid finale, there’s a great story here about the heroine Isabelle, who grows from a vain girl (desperate to be pretty) to a mature decision maker.  In doing so, she finds a balance between bravery/strength and compassion/kindness that even Cinderella has not mastered (or, for that matter, most human beings).  Ironically, this conclusion forces an uncomfortable new dilemma on the reader:  might these similarly unrealistic measures of success just be replacing one misery with another?  Perhaps this could be material for a sequel?

[Disclaimer:  I received an Advanced Reader’s Copy (and some nifty swag) in exchange for an unbiased review.  The book was originally scheduled for release on May 28th but is already out]
Posted by Paul at 1:25 PM