The Beauty of the Moment, by Tanaz Bhathena 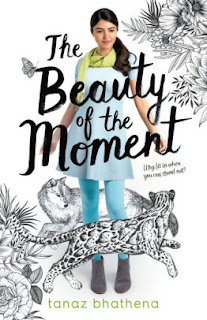 Susan and her family have immigrated to Canada from Saudi Arabia, but the family tie is strained by her father's decision to stay back in Saudi and work, leaving Susan and her mom to fend for themselves in the new country.  Susan is a good student but doesn't want to become the doctor or engineer that her parents want.  She'd rather be an artist.  Tasting the freer life in North America (as epitomized most by getting her driver's license) makes her more willing to explore those desires.

Malcolm, born in Canada but Parsi and raised in a Zoroastrian family, is an angry young man.  After his mother died from cancer and his father turned to physically abusing him, Malcolm drifted, getting into fights and other trouble.  He couldn't be a starker contrast to straight-A Susan.  Naturally enough, then, the two of them connect and form a tentative relationship.  Cultural differences, family pressures, and awkward adolescent moments intervene.

A rather more sophisticated teen romance than the typical sort, heavily imbued as it is with Middle Eastern and South Asian cultural references.  But the complexity goes far beyond the cultural nuances.  Susan and Malcolm have complicated families.  Between the strains in Susan's family as her parents contemplate divorce and Malcolm's tense relationship with his abusive father and new stepmother, these kids have a lot on their plates.  That it flows over into their relationship with each other is understandable to readers, yet it is an understanding that rarely finds its way in YA romances (where usually the romance lives in isolation from the family's troubles).

This busy novel hardly needs the subplots of Susan's artistic ambitions or the more mundane story of getting her driver's license or the story of an upcoming school project.  Still, these details nicely root the story in how normal and everyday these kids are.  This, in turn, make the story easy to relate to, despite the unusual backgrounds from which Susan and Malcolm come.
Posted by Paul at 1:44 PM