The Truth About Leaving, by Natalie Blitt 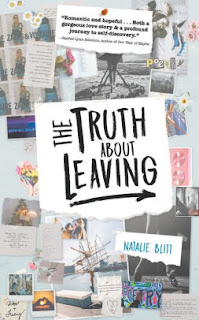 With her mother working in California this year, Lucy and her father have their hands full taking care of her little brothers back in Chicago.  It's her senior year and Lucy needs to make plans for her future.  It's always been assumed that she would go to Northwestern, but now she isn't sure.  Having her boyfriend dump her before the start of the year had made her her realize the pitfalls of always trying to please others (as well as making her initially swear off boys for a while).

Then, a new student shows up in her poetry class.  Dov is an exchange student from Israel, with a soft demeanor and a reticence that suggests some dark history.  As this is a romance, Lucy naturally tries to break through his shell.  When she finally succeeds, the two of them develop a very intense relationship, haunted by the reality that Dov is going back home in a few months and start his three years' of military service.  But while the relationship is overshadowed by this grim reality, Dov's devotion is an inspiration and helps Lucy figure out what she should do with herself.

It's mostly by-the-numbers YA romance: the sulking, but polite and responsible boy; the spats, falling outs, and eventual reconciliation; and of course the doubting grownups who are proven wrong by the true lovers.  The differences lie in the characters, and Dov in particular.  Lucy is far too perfect to be interesting but Dov's serious demeanor, grim backstory, and maturity makes for a fascinating protagonist.  Haunted by the death of his brother and an ugly way he handled his grief, he is obsessed with serving his country in a way that seems selfless, but which he comes to understand is selfish.  The story is actually well served by sweet chaste romance.  There's a surprising lack of sex in an otherwise very intense relationship, which serves mostly to underscore a rather sober and mature approach to the challenges of their relationship.
Posted by Paul at 1:12 PM