A Danger to Herself and Others, by Alyssa Sheinmel 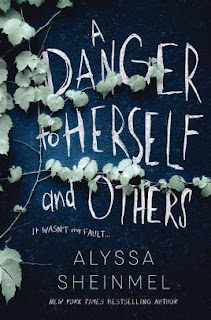 After her roommate is seriously injured in a fall, Hannah is accused of causing the accident. It is all just a result of a love triangle involving Hannah, her roommate, and Jonas (Hannah's boyfriend that her roommate wanted for herself).  But no one is interested in the story.  Instead, she's been involuntarily committed for psychiatric evaluation.  She's dangerous, or so they say, to herself and others.

To prove them wrong, Hannah just needs to win over the staff at the hospital so they will listen to her story and help her out.  It's what she's always done, proving to adults like her parents how responsible and mature she is, even when she is inwardly afraid.
But at a critical point, Hannah's worldview falls apart. Things stop making sense.  Not only the explanations but the people involved in them turn out to be very different from how Hannah understood things.  Faced with a drastic correction of her reality, Hannah has to reevaluate what actually happened.

A story of mental illness that stands out for its ability to throw you off and also for its reluctance to resolve Hannah's issues easily.  Stories about returns to sanity are pretty common.  At the risk of a spoiler, it's interesting that in this one the journey is really only beginning at the end of this book!  That said, the ending is repetitive and drags on too long.  Sheinmel's only real point is that fighting mental illness is an ongoing affair and that the dangers lie mostly to the sufferer.  Struggling with making that point definitively, the novel ends with a whimper.
Posted by Paul at 2:56 PM