A Good Kind of Trouble, by Lisa Moore Ramée 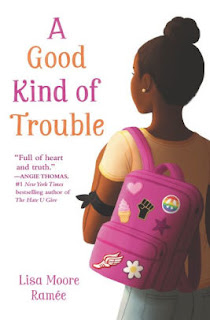 Shayla is a good girl, follows the rules, and keeps out of trouble.  But starting junior high this year, the rules seem to have changed.  She and her two best friends and her are facing competing loyalties as their classmates value racial identity over friendship and pressure the girls to hang out with their own kind (Shayla is black, while the other two are Asian and Latina).  Just complicating matters, boys and girls have started "talking" and the three girls don't really want to have anything to do with that.

Outside of school, the rules seem to have changed in even crazier ways.  The community is riled up over a police shooting.  Shayla is growing more aware of the inherent racism around her as her family takes part in various protests.  And when an incident presents itself to Shayla in her own school, she has to decide if she will be brave enough to speak out, even if it means breaking the rules.

Empowering and educational.  The story is a bit too topical and won't age well, but this is a good book about being an African American tween -- a lovely mixture of the familiar tropes of white-girl middle readers (i.e., most of the books out there) with some distinctly black themes.  It isn't very subtle, but it doesn't need to be as these kids, while articulate, are not particularly sophisticated yet.  YA protagonists of color are rare and, when they appear, are either totemic or white washed.  Shayla is neither -- a normal twelve year old who is black.  She's proud of that identity, is race conscious and racially proud, but she's lots of other things as well.
Posted by Paul at 2:22 PM