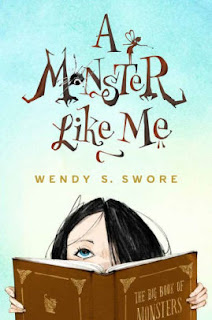 Disfigured by a blood tumor, Sophie has learned to cope with unwanted attention by hiding.  And she's created a complicated narrative for herself that she’s been cursed by a witch.

Armed with an encyclopedia of monsters, she not only has identified her monstrous self, but has no problem spotting the goblins and demons at school (disguised as her classmates and teachers) that torment her.  Her new friend is obviously a fairy and the girl’s sweet grandmother a (good) witch.  Her Mom’s new boyfriend is a demon trying to steal her away and Sophie has ways to ward that and the other evils off.  But her deepest fears is her mother discovering that Sophie is really a monster inside.  Will she keep her or throw her out?

Initially sweet and funny (and even a bit educational as the book-within-the-book provides nice summaries about the history of bestiaries and eventually some good life advice), I found Sophie’s character a bit too self-absorbed and tedious.  Her stubborn refusal to listen to what she is told is basically the only thing that drives the drama in this story. And it is hardly an endearing quality.  Yes, eventually Sophie will show a heart of gold, but it’s that refusal to pay any attention to the adults that really defeats her along the way. Even her redemption in the end is based on her refusal to listen to what has been said and instead claim that it is her magic that saves her friend's little brother Will.  She never quite manages to break out of her denial of reality and that is ultimately disturbing (and not inspirational).
Posted by Paul at 2:55 PM