Days of the Dead, by Kersten Hamilton 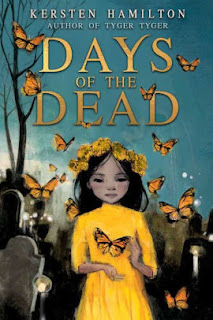 Since her mother died, Glorieta has mourned the fact that her aunts won't speak about their sister.  Suicide is a sin and Tia Diosonita won't allow her offense to besmirch the family's honor.  Papi even had to cremate the body or else have Mama buried in unconsecrated ground.  With the Day of the Dead approaching, Glorieta hopes to somehow get her Tia to accept their sister back and let her be buried with the rest of the family.

Meanwhile, in their small town of Epoch NM, things are changing.  Glorieta's step siblings Lilith and Angus have come to stay, dumped off by their abusive father.  Angus gets along fine, but Lilith does everything she can to fight her step sister.  In a particularly harrowing passage, Lilith goes so far as to betray Glorieta to ICE agents causing Glorieta to be rounded up erroneously as an illegal.

This mixture of family, tradition, and current events creates a memorable story.  The ICE passage may be too intense for younger readers but is very topical given recent weeks' news.  This is not really a story about that though, but of the ties of family and of the power of forgiveness.  I felt that Glorieta did a bit more forgiving than she really ought to have done, but perhaps I am not as big or brave of a person as this little girl.  Her story, though, is inspiring.  Between that and the strong characters and vivid setting make this a remarkable book.
Posted by Paul at 12:06 PM