Sorry Not Sorry, by Jaime Reed 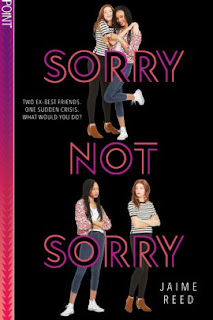 When Alyssa collapses in the midst of a hurricane recovery fundraiser, only Janelle knows that it’s her diabetes and that her condition is getting worse.  The problem is that Janelle and Alyssa aren’t friends anymore.  Years of being best friends have long been forgotten and the girls have turned to bitter enmity.  So, how should Janelle respond when officially they have nothing to do with each other?

This dramatic reveal of Alyssa’s secret condition brings out the worst in her friends.  Her new besties rally around her, but mostly to try to grab the limelight.  Only Janelle really seems to care about her.  Those feelings are part driven by nostalgia, but also underscored by Janelle's history of altruism.  Driven by her feelings, Janelle makes a fateful decision: she will donate one of her kidneys to save her ex-BFF.

It’s a plot that stretches credulity and Reed puts a lot of effort into convincing us that it’s plausible.  Janelle’s family background, some miraculous genetic matches, and some happy coincidences all contribute to the set-up.  In the end, though, Reed doesn’t have much to actually say about donation or about friendship.  The clever idea is about all the story has.  That's a wasted opportunity for a novel that could have really dug into the power of nostalgia, the altruism of organ donation, and the issues of chronic disease.  The topics are certainly brought up, but the book doesn't seem to know how to take the next step and really address them.