The Art of Losing, by Lizzy Mason 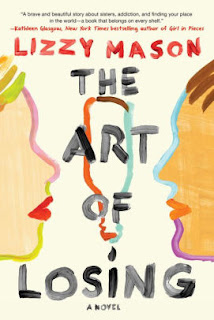 When her drunken boyfriend causes an accident that nearly kills her younger sister, it's the last straw for Harley.  The fact that she caught them fooling around shortly beforehand doesn't help and leaves Harley with conflicted feelings.  With her sister seriously injured and lying in the hospital in a coma, Harley has no opportunity to work through her anger with her sister.  Instead, Harley finds herself wracked with guilt as she keeps vigil over her, recalling the good and the bad in their relationship.

For her boyfriend, she's more decisive.  It's not as if he's been a saint up to now either.  Through flashbacks, we see how his addiction to alcohol has slowly corroded the trust that existed between them and also destroyed the other friendships around him.

It is thus with some irony that while processing all of this, Harley rekindles old feelings for the boy next door, Raf.  While Harley and Raf were close as children, his own demons led him to addiction as well, and eventually to rehab.  Now in AA, Raf helps Harley understand her ex-boyfriend's struggle.  But are these strong feelings they are developing with each other a good thing or just another dangerous trap for Harley?

A complex story about addiction and its destructive impact on families and other relationships.  And also a parallel story about sisterhood and the bonds between siblings.  That Mason balances these two separate threads is a testament to her talent at formulating a good story.  It's far from perfect though.  The addiction material is her crusade, of course, and she packs in a bit more material than truly fits (giving the story a preachy character it did not need), but the material is well researched and generally interesting.  The relationship between  Harley and her sister gets relatively neglected but resolves satisfactorily.  While this is a good book about teen alcoholism, it has fewer insights on the love/hate relationship between sisters.
Posted by Paul at 12:57 PM